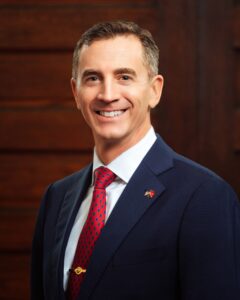 Chris Castlen is a lifelong resident of Kentucky, the son of Joe Castlen of Stanley and Nancy Ward Castlen of Owensboro.

Resourceful and self-reliant, Chris started leasing a tobacco base his freshman year of high school.  Along with his other jobs, this enabled him to pay for a significant amount of his first two years of college.

Chris would join the United States Marine Corps as a sophomore.  However, he would return to Western Kentucky University and complete his remaining years with the assistance of the GI Bill.

While in college and prior to his enlistment, he met Stacy Rhoads (his wife to be).  After graduating, they married and have since been residents of Daviess County.

Chris began his career in law enforcement as a Deputy Jailer with the Daviess County Detention Center.  He then served over 20 years with the Owensboro Police Department, where he retired in 2017 as a lieutenant.

Chris is a graduate of Owensboro Catholic High School.  He earned a Bachelor of Arts (BA) in 1996 and a Master of Public Administration (MPA) in 2012, with both degrees from Western Kentucky University. He earned his Graduate Certificate in Criminal Justice Education from the University of Virginia and graduated from the FBI National Academy in 2014.

Today, Chris works in human resources at a local organization.  However, he is still an active member of the Fraternal Order of Police, the Kentucky Law Enforcement Assistance Program as a Strike Team member, and the Marine Corps League.  Chris is also an active member of his church board and other non-profit boards.

He and his wife Stacy have been married since 1996 and have three daughters, one of which is a recent WKU graduate, another is attending college and one is in high school.