Daviess County Fiscal Court has approved the hiring of a County Veterinarian, as part of a larger effort to open a spay/neuter clinic at the Animal Shelter.

“As we move forward, we found it harder and harder to get the vet services that we needed,” said Judge-Executive Al Mattingly.  “Last year, we actually did a Request for Proposals from the local vets.  We had no replies.” 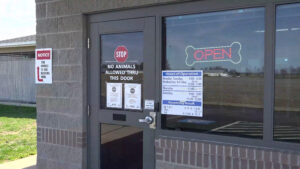 “We were faced with two paths,” he added.  “Either…start putting down a lot more animals than we would want to, or hire a vet and start our own clinic.”

The County has made an offer to Dr. Julie Gray, a veterinarian with the Vanderburgh Humane Society.

“She will be starting the fifth of July,” said David Smith, Director of Legislative Services.  “And she will be working with us and the architects in designing the building, and she will help us order the equipment.”

The clinic will be an addition to the existing Animal Shelter near the Daviess County Operations Center. Smith said the vet clinic will be operational sometime this summer.

“We are not the first county to do this,” he added.  “We have a relationship with other counties of similar size.  Hardin County, which is Elizabethtown, has about the same population.  Their animal shelter hired a vet two years ago, that program is working well.  We worked with them to get an idea of what our costs would be for operations.”

The County believes the addition of a veterinarian will improve on-site care for the animals and greatly expand spay/neuter assistance.

“We also expect some revenue coming into the County to offset some of these costs,” Smith concluded. “Currently, there are not many low-cost spay/neuter clinics available.  A lot of rescues and other shelters may come to us to schedule spay/neuter appointments.”

Finally, Smith mentioned the potential for a trap and release program for stray cats, in particular.

“Cats serve a good purpose in the community.  They help keep mice, rats, and other vermin down but they can become overpopulated.  Having an in-house vet would allow us to look at a trap, spay/neuter, and release program.”

Fiscal Court agreed to amend a zoning classification for 2116 Daniels Ln with two added conditions for the developer.

The applicants, 5five Financial, LLC (Chase Kelley) and James A. Coomes, are looking to add apartments to the nine-acre property near Hayden Road.

The development required a zoning change from R-1A Single Family Residential to R-3MF Multi-Family Residential.  The Owensboro Metropolitan Planning Commission (OMPC) approved the request on a 7-2 vote in February 2021 with these conditions.

Judge-Executive Al Mattingly provided an update on the Confederate monument.

Mattingly said he’s in contact with another entity for a potential site and hopes to bring a recommendation in late May.

Daviess County will receive approximately $1.5 million from the state to aid in the construction and maintenance of county roads.  These funds are derived from the state gas tax, and they will be distributed based on available financial resources from the Kentucky Transportation Cabinet (KYTC).

Fiscal Court approved an easement with G.L.O.F, LLC providing a passageway between two properties owned by Diamond Lake.  The resort is under new ownership.

Commissioners amended a material handler lease agreement with Ricky Moore Trucking, LLC to better specify the ‘lease to own’ arrangement for equipment.

Garrett Snyder and Nathan Lanham will join the Road Department as Seasonal Interns.

John Sampley will be hired as a part-time, year-round worker at the Parks Department.

Joseph Schmid will serve as a seasonal worker at Yellow Creek Park.

Gail Niehaus has been appointed to the PVA Assessments Appeals Board.