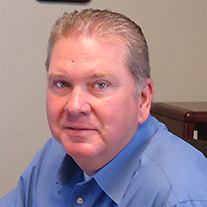 Jeff Jones has served as County Coroner since 2011. The Coroner’s Office is a separate and independent division of Daviess County Government and is funded through Daviess County Fiscal Court.

Jeff Jones was born and raised in Daviess County, KY.  Jeff graduated from Owensboro Catholic High School and attended Eastern Kentucky University.  He started his career with the Daviess County Sheriff’s Office in 1985 as a patrol deputy and was re-assigned as a Detective in 1994.  In 1999, he was promoted to Chief of Investigation, where he oversaw the daily operation of criminal cases including narcotics.  In January 2007, Jeff was promoted to Lt. Col., Chief Deputy.  In 2010, Jeff was sworn in as the Daviess County Coroner.  He has completed numerous training courses from the Kentucky Department of Criminal Justice and Federal agencies.  He has been committed to promoting community education and awareness focused on preventing behaviors that can lead to unnecessary death.

Jeff has been active in the community by serving on the following boards:

Jeff is married to Michelle Foster Jones and they have four children: Amanda, Josh, Caitlin and Nathan.  They also have three grandkids: Max, Luke and Wyatt.  Jeff and Michelle have been members to St. Pius Catholic Church for over 30 years.

The Coroner’s office is concerned with the investigation of sudden and unexpected, violent or suspicious deaths. Previous certification in postmortem examinations were achieved prior to this qualification. The coroner and deputy coroners are certified by the Commonwealth of Kentucky to conduct postmortem examinations per KRS. 72.405 (5). coroner and deputy coroners are mandated by law to have yearly training by the Criminal Justice Cabinet. The Three sections are under the coroner’s direction: Investigations, Autopsy Support and Administrative Support. These duties include field investigation of the scene and circumstances of death, notification of next-of-kin and control and disposition of personal property of the deceased.