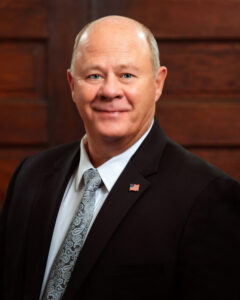 Larry’s parents, Charles and Zula Roberts Conder, were from the Whitesville and St. Lawrence area of Daviess County.  Larry spent a portion of his childhood in Louisville, but visited “home” regularly.

Larry was employed at Texas Gas for 15 years beginning in 1980. As deregulation of the Natural Gas industry emerged in the early 90’s, Larry realized the unique position this opportunity presented, partnering to create Innovative Gas Services, Inc. to fulfill a need for the delivery of natural gas services.  During that time, he obtained his bachelor’s degree in Business Administration from Brescia University and attended Murray State University MBA program.

Currently, Larry is the Director of Operation and Gas Supply for Public Energy Authority of Kentucky (PEAK), assisting municipalities in acquiring their Natural Gas requirements across the natural gas pipeline network.

Larry and his wife, Rosemary, have been actively involved in the revitalization of Owensboro, purchasing, and renovating several properties, and assisting several local entrepreneurs to realize their dreams to start and own a business.   They were selected as Entrepreneur of the Year by the Owensboro Chamber of Commerce in 2010.  Larry was named as a Distinguished Alumni for Brescia University in 2012.

Prior to being elected City Commissioner, Larry served on several local boards including The River Park Center, We Are Downtown, Inc., the Owensboro Historic Preservation Board, Owensboro River Port Authority and Brescia University Board of Trustees.

Larry and Rosemary have 6 children and 18 grandchildren who motivate Larry’s determination to protect the future of our community as a great place to “Live, Work, and Play”!